US, Iran Moving Again Toward Confrontation 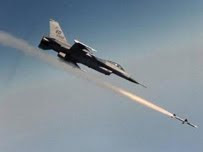 "Iran’s announced intention to build 10 new nuclear enrichment plants has been deemed "unacceptable" by the administration of President Barack Obama, which warned Monday of increased pressure on Tehran if it does not soon accept Western proposals to curb its nuclear program.

The contretemps, which came amid reports that Tehran had arrested five British nationals whose sailboat strayed into Iran’s territorial waters, was the latest indication that tensions between Iran and the United States and its Western European allies are escalating rapidly......

Indeed, the neoconservative editorial board at the Wall Street Journal Monday jumped on Ahmadinejad’s announcement to argue for a much tougher line, even "military strikes," against Iran......"
Posted by Tony at 3:13 AM