Sayyed Nasrallah: We Want Lebanon for All Lebanese Alike 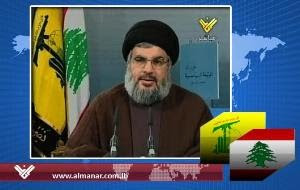 NOTE: I will provide a link to a video of his televised press conference, as soon as it is available.

Sayyed Nasrallah held a press conference through a giant screen at al-Jinan hall on the airport road to declare the new political document.....

"At an exceptional time filled with transformations, it is no longer possible to address these changes without noting the special position our resistance has reached. We will address these transformations through two paths: the first is the Resistance one that resorts to the military and political victories as well as the expansion of the Resistance while the second focuses on the path of the US-Israeli mastery and hegemony which is witnessing military defeats that showed a failure in administering the developments."

"What strengthens the international hegemony system crisis are the actual collapses in the financial markets and the entry of the US economy in a situation of failure. Therefore, it's possible to say that we are amid historical transformations that signal the retreat of the US role as a predominant power and the demise of the Zionist entity."......

CHAPTER ONE – DOMINATION AND HEGEMONY......

"Globalization has reached its most dangerous aspect when it turned to a military one led by those following the Western plan of domination and was reflected in the Middle East in Afghanistan, Iraq, Palestine and Lebanon. This plot found its peak with the neoconservative grip under the administration of George Bush since their project found its way to execution after he was sworn in. It was neither weird nor surprised that what the neoconservative platform focused on the most was rebuilding US capabilities what reflected a strategic vision of US national security through building military strategies not only as a force of deterrence but also as a force of action and intervention.......""
Posted by Tony at 9:33 AM