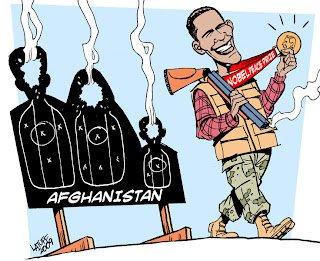 ".....And thus President Obama stands to reprise not the courage of Harry Truman, but rather the failure of Lyndon Johnson, whose bold and ambitious 1964-65 Great Society anti-poverty and civil rights programs were buried in the quagmire of Viet Nam.

President Obama travels to Oslo in just a little more than a week, to try to explain to the world why he deserves the Nobel Prize for Peace. It won't be easy. Most observers thought the Nobel Committee made their choice partly as a gesture of thanks to the people of the United States, for ostensibly voting out the horrors of Bush-era war policies. But mostly, the Nobel Committee seemed to be using the Prize to remind the new president of his obligations to the world, to remind him of what real change, where peace is involved, requires. I don't envy President Obama's speechwriters on this one. Accepting the Nobel Prize for Peace, having just announced that 30,000 or more young men and women are about to be sent to kill and die for an illegitimate war already lost, will not be easy."
Posted by Tony at 6:44 AM