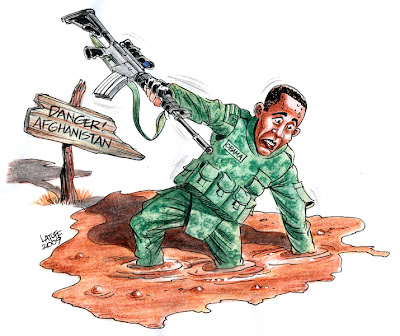 "This week's leak to the New York Times of a proposal for U.S. Special Operations Forces (SOF) raids against Afghan insurgent sanctuaries in Pakistan may be intended to put more pressure on the Pakistani military to take action against those sanctuaries....

And the position of the Barack Obama administration on the necessity of attacking insurgent safe havens in Pakistan appears to be in line with the proposal for cross-border raids.

Carrying out such raids would probably provoke a new level of anti-U.S. sentiment in Pakistan, with dangerous political consequences in that country, according to experts on Pakistan, but the behaviour of the national security organs of the United States in the recent past suggests that such dangers are being rationalised....

But the Obama administration has painted itself into a corner by refusing to acknowledge publicly that the Petraeus war strategy is not working, despite obvious scepticism about it in the White House. A Dec. 16 story in the Washington Post reported that senior officials had already decided to base the administration's arguments for a "significant drawdown" of troops to begin in July 2011 not on the obvious failure of the Gen. Petraeus's strategy but on his claims that the strategy is succeeding.

They consider that course "less politically dangerous" than arguing that the Petraeus strategy hadn't worked, according to the Post story. "It's always better to call it success as opposed to failure," a senior official was quoted as saying....."
Posted by Tony at 7:46 AM