Swedes are smearing him and encouraging the US 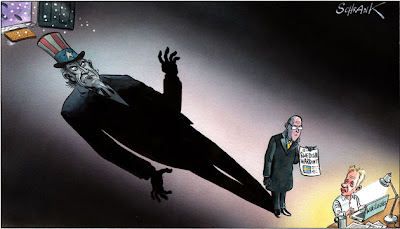 By John Pilger
The Independent

"......What happened in Sweden was a public smear, and trial by Swedish tabloid media. The chief prosecutor, Eva Fine, understood this. After making her own inquiries, she cancelled the arrest warrant. "Julian Assange is not suspected of rape," she said. It was only the intervention of a leading political figure, Claes Borgstrom, that reactivated the case....

Meanwhile, we have the spectacle of the US Attorney General trying to concoct a specious law to prosecute Assange for revealing the lies and obsessions of rapacious great power, which, under the First Amendment in the land of Thomas Jefferson, is not a crime. He deserves all our support."
Posted by Tony at 8:17 AM