A 21st-century Nasser could give the Arab world its voice

Egypt's coup makers are phoney nationalists. But the goal of independence and social justice unites people across the region 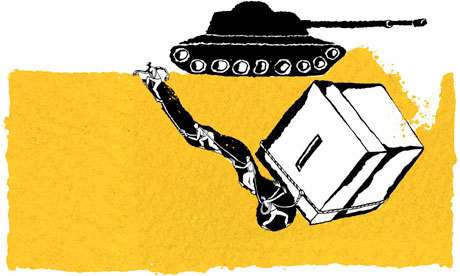 'Sisi's men had got to work without delay to seal Egypt's border with Gaza, destroying 80% of the lifeline tunnels to the Israeli-blockaded Palestinian territory.' Illustration by Belle Mellor
"It's hardly surprising that the uprisings hailed as the Arab spring have long since been seen as having turned to Arab winter. Western intervention left Libya in chaos; Syria and its neighbours have been engulfed in foreign-backed sectarian war; protest is brutally suppressed in Bahrain and other Gulf regimes; Yemen has been corralled into a phoney "transition" as the US wages its never-ending drone war, with 34 killed in the past fortnight alone.
Now the mass Cairo street occupations against last month's ousting of Egypt's first freely elected president wait for another massacre to be unleashed by the leaders of the coup. Only in Tunisia, cradle of the Arab upheavals, is a genuine democratic transition still in play. But now the second political assassination in a year has triggered an Egyptian-style movement demanding parliament's dissolution and the resignation of the Islamist-led government.
Tawakkol Karman, the Yemeni uprising leader denied entry to Egypt last week, warned that the "destruction of Egypt's revolution means death for the Arab spring". Of course, many supporters of the coup, which followed mass demonstrations calling for the end of Mohamed Morsi's year-old presidency, don't regard it as a coup at all, but the army's fulfilment of "the people's will".
That view is echoed by its foreign backers, from Saudi Arabia to the US. John Kerry, the US secretary of state, claimed the Egyptian army – trained and bankrolled by his government to the tune of $1.3bn a year – had been "restoring democracy" by overthrowing the country's democratically elected leader.
There's no doubt the coup had large-scale support (even if polling suggests it has been exaggerated) from an opposition that united right and left, along with supporters of the former Mubarak dictatorship and many who opposed it and want to see more far-reaching change in Egypt.
The latter had plenty of grievances against Morsi and his Muslim Brotherhood-led government: its indulgence of army and police brutality, failure to break with Mubarak's failed neoliberal economic policies, social conservatism, institutional power grabs, inability to build alliances with secular forces and appeasement of US and Israeli power.
But there can be no doubting what has taken place. A leader and movement who won a string of elections and referendums have been removed by force in favour of military placemen. The president has been imprisoned while surreal charges are cooked up – of plotting with the Palestinian group Hamas to escape from one of Mubarak's jails.
Large numbers of Brotherhood activists have been arrested, pro-Morsi media outlets closed and hundreds of protesters killed as resistance to the new regime grows. Meanwhile, the first response of the western-backed Gulf dictatorships that bankrolled the opposition – Saudi Arabia, the UAE and Kuwait – was to offer $12bn in loans. The US, which hedged its bets with Morsi, demonstrated its support for the generals by agreeing to deliver four F-16 fighter jets (and then delayed them in response to the violence).
Israeli leaders took a similar line. The former prime minister Ehud Barak insisted that the coup leader, General Abdel Fatah al-Sisi, deserved "the support of the free world". Which was only remarkable for Barak's frankness, as Sisi's men had got to work without delay to seal Egypt's border with Gaza, destroying 80% of the lifeline tunnels to the Israeli-blockaded Palestinian territory, and co-operate closely with Israel against jihadist groups in Sinai.
Despite all that, there has been a determined drive by Egypt's pro-coup media to present Sisi as an independent, even anti-American, figure. There's even an effort to link him with Gamal Abdel Nasser, Egypt's popular Arab nationalist president of the 50s and 60s.
That's partly because Nasser repressed the then US-backed Muslim Brotherhood (along with communists). But it also reflects the fact that Nasser's reputation as a genuinely independent and progressive leader who stood up to the west and Israel is still strong in Egypt and across the region – and the coup mongers want to use it to give themselves some spurious legitimacy.
The idea that the US-dependent Sisi, whose military hierarchy controls vast commercial interests, is a new Nasser is ludicrous. But the propaganda ploy is revealing. Despite his failings and authoritarianism, Nasser is remembered as a leader who stood for regional unity and independence, economic development and social justice.
Shorn of the authoritarianism and anti-Islamism, those are goals that unite people throughout the region today and fuelled the 2011 uprisings. If Morsi had stood unequivocally for them, he would have attracted powerful support far beyond the Islamist camp, inside and outside Egypt, in the face of a certain backlash.
The Arab world is now riven by the menace of sectarianism and breakup into smaller states. It's afflicted by polarisation between secularism and Islamism, the wealth and influence of reactionary Gulf autocracies and the constant military intervention and presence of western powers.
A democratic 21st-century Nasser, able to straddle the religious and secular camps, could be the unifying force to confront those challenges. What is certain is that Egypt's coup makers haven't settled the country's direction - and the popular movements that erupted two years ago are going to keep on coming, across the region. They are only waiting for effective political expression."
Posted by Tony at 1:32 PM