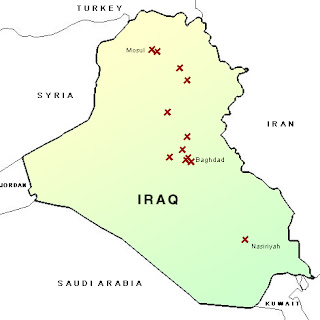 "WASHINGTON - While US President George W Bush appears, however belatedly, to be embracing recommendations by the bipartisan Iraq Study Group to begin withdrawing US combat troops by early next year, he has implicitly rejected the ISG's call to renounce any intention to establish permanent military bases in Iraq.

Indeed, confirmation by his spokesman, Tony Snow, last week that Bush favors a "Korean model" for Iraq where Washington would provide "a security presence" and serve as a "force of stability [for] a long time" spurred new questions about the administration's aims in Iraq and whether they indeed included a permanent military presence.......

At least one Korea specialist said there are indeed parallels between the two situations, but only in a negative sense.

"Korea and Iraq are both examples of Americans stumbling into an unknown political, social and civilizational thicket, thinking they will solve some problem quickly, only to find that they cannot get out - ever, apparently," said University of Chicago historian Bruce Cumings, who stressed that Washington first became militarily involved in Korea immediately after Japan's defeat in World War II to prevent guerrillas led by North Korean founder Kim Il-sung from taking over the South.

"Then the Pentagon perpetual-motion machine takes over, and we have a new set of military bases to go with the roughly 735 [others] that we have around the world," he said.

Another prominent Northeast Asia specialist at the University of California at San Diego, Chalmers Johnson, described the analogy as potentially "disastrous". "The Koreans have not asked us to stay there for the past 50 years. It's become one of the most anti-American countries that we've been allied with for some time now, in large part due to the bases we have there," said Johnson, who has published several books on Washington's global military deployment, including The Sorrows of Empire."
Posted by Tony at 7:36 AM