Deconstructing Fatah al-Islam an Easy Task, Thanks to DEBKAfile 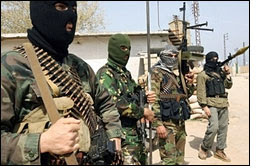 "DEBKAfile, the Mossad front, makes life so much easier. For instance, in regard to Fatah al-Islam, the bank robbing contract Sunni terrorist group put together by the neocons and Saudi prince Bandar in Lebanon to confront the Shi’a Hezbollah and currently holed up in the Nahr al-Bared Palestinian refugee camp, DEBKAfile tells us “Fatah al-Islam are not fighting alone; they are backed by elite units of the Iranian-Syrian-backed Popular Front for the Liberation of Palestinian-General Command, which is commanded by Ahmed Jibril. These Palestinian units are highly trained in urban guerrilla warfare by Syrian commando battalion officers and Iranian Revolutionary Guards and have better skills than the Lebanese commandoes.”

As we learned last week, the famous Entebbe hijacking “was the work of the PFLP, with help from the Israeli Secret Service, the Shin Bet,” according to British diplomat D.H. Colvin. “The Popular Front for the Liberation of Palestine took credit for the hijacking, which they said was for the purpose of bringing attention to the Palestinian people’s plight. The plane was travelling from Israel to Paris when it was hijacked on June 27th, 1976, and re-routed to Entebbe Airport in Uganda,” the International Middle East Media Center summarizes. “With the newly-released British intelligence document, dated before the military operation to rescue the hostages on July 3rd, 1976, some in the intelligence community are calling for an investigation of Israeli involvement in the planning and implementation of the plane hijacking.”

In other words, we can assume Fatah al-Islam, linked to the Shin Bet compromised PFLP through the splinter group the Popular Front for the Liberation of Palestinian-General Command, is yet another covert operation, designed to go up against Hezbollah, never mind the futility of such an operation. It appears to be a collaborative black op intelligence effort between the Israelis, the Saudis, and the neocons—with the cooperation of the Senora government in Lebanon—all interested in taking down Hezbollah a peg or two, especially considering the disturbing fact the Islamic organization is now capable of fending off Israeli predation......

Naturally, the corporate media, as a neocon-friendly propaganda apparatus, would have us believe the “mujahadin in the ’80s was one era” and there is no connection between “al-Qaeda” or “al-Qaeda inspired” terrorism of the current era, never mind suspicious facts and the historical record glaringly obvious. Increasingly, with every passing day, it is becoming more and more difficult for the government and its corporate media handmaiden to prop up the official fairy tale of Islamic terrorism spawned from remote caves.

Kudos to DEBKAfile for making the task all the more easy. "
Posted by Tony at 10:17 AM