In Iraq's four-year looting frenzy, the allies have become the vandals 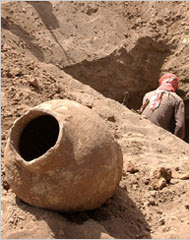 "Fly into the American air base of Tallil outside Nasiriya in central Iraq and the flight path is over the great ziggurat of Ur, reputedly the earliest city on earth. Seen from the base in the desert haze or the sand-filled gloom of dusk, the structure is indistinguishable from the mounds of fuel dumps, stores and hangars. Ur is safe within the base compound. But its walls are pockmarked with wartime shrapnel and a blockhouse is being built over an adjacent archaeological site. When the head of Iraq's supposedly sovereign board of antiquities and heritage, Abbas al-Hussaini, tried to inspect the site recently, the Americans refused him access to his own most important monument.......

As long as Britain and America remain in denial over the anarchy they have created in Iraq, they clearly feel they must deny its devastating side-effects. Two million refugees now camping in Jordan and Syria are ignored, since life in Iraq is supposed to be "better than before". Likewise dozens of Iraqis working for the British and thus facing death threats are denied asylum. To grant it would mean the former defence and now home secretary, the bullish John Reid, admitting he was wrong. They will die before he does that.

Though I opposed the invasion I assumed that its outcome would at least be a more civilised environment. Yet Iraq's people are being murdered in droves for want of order. Authority has collapsed. That western civilisation should have been born in so benighted a country as Iraq may seem bad luck. But only now is that birth being refused all guardianship, in defiance of international law. If this is Tony Blair's "values war", then language has lost all meaning. British collusion in such destruction is a scandal that will outlive any passing conflict. And we had the cheek to call the Taliban vandals."
Posted by Tony at 5:08 AM