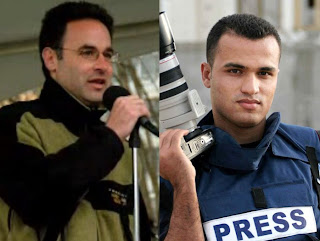 "On June 16 I was the co-recipient of the Martha Gellhorn Prize for Journalism with Mohammed Omer in London. Omer is a 24 year-old Palestinian with whom I felt, and feel, honored to have shared this award. During my brief talk while accepting the award, I told the audience I could not think of anyone else I would rather share the award with. Omer's work from his Gaza homeland has been a beacon of humanitarian reportage; his work serves as a model of peace and attempted reconciliation with Israel for the youth in his occupied territory......

Former Dutch ambassador Jan Wijenberg said of what happened to Omer: "This is by no means an isolated incident, but part of a long-term strategy to demolish Palestinian social, economic and cultural life ... I am aware of the possibility that Mohammed Omer might be murdered by Israeli snipers or bomb attack in the near future."

Janet McMahon, managing editor of the Washington Report on Middle East Affairs with whom Omer files stories, just told me he is still in hospital. "He may go home, or have an operation. He's still in a lot of pain -- and it's hard for him to swallow, or to breathe deeply. He's being fed intravenously."

As Omer's colleague, I cannot reconcile the disparity in our experiences. How can we reconcile something that is irreconcilable in the absence of all justice? "
Posted by Tony at 10:37 AM