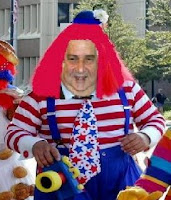 Read this piece to see the thinking of the pathetic regime of the Rabbit windbag.

"Syrians affectionately call Barack Hussein Obama "Abu Hussein" (father of Hussein), even though he has no son, and look forward to him visiting the country. First, though, Obama will have to repair the damage done by the George W Bush administration, such as by sending an ambassador to Syria and recognizing that some problems in the Middle East can only be solved with Damascus' cooperation...."
Posted by Tony at 5:19 AM