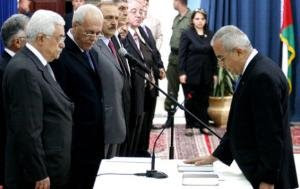 (left) The Ramallah Mafia Swearing in of its godfather!

"09/03/2009 Hamas said on Sunday that it would not join a unity government with Fatah that was headed by outgoing Palestinian Authority Prime Minister Salam Fayyad.

Hamas's announcement came in response to reports that the US administration was demanding that Fayyad head a new Fatah-Hamas government as a precondition for recognizing such a government and providing the Palestinians with financial aid.

PA officials would neither confirm nor deny the reports, which claimed US Secretary of State Hillary Clinton had set the condition during her recent visit to Ramallah. "We reject any attempt by the US to interfere in our internal affairs," said Ismail Radwan, a Hamas official in the Gaza Strip. "The Palestinians alone will decide on the makeup of the new government."

Radwan said that in any case, Hamas was opposed to the appointment of Fayyad as prime minister in a unity government.