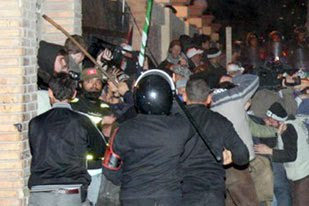 "George Galloway, the British MP leading the Viva Palestina international aid convoy to the Gaza Strip has been forced to leave Egypt, the group has said on its website.

Galloway was apparently picked up by Egyptian officials at the Rafah border crossing on Friday and driven to Cairo where he was placed on a flight back to London.

Galloway told Al Jazeera by telephone from the airport that he had been harassed by about 25 Egyptian police officer as he attempted to re-enter Gaza to join the rest of the Viva Palestina activists.

He said Egyptian officials told him he was being sent out of the country and was now "persona non grata".....Seven other members of the Viva Palestinian convoy have also been ordered arrested after being accused of inciting riots in El-Arish......."
Posted by Tony at 3:05 AM