Gaza Freedom March: detained at the US embassy 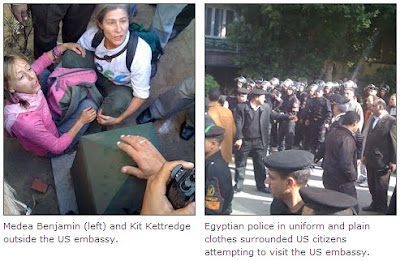 ".....At 9:45am on 29 December, Evans, myself and two other Gaza Freedom March participants came back to the embassy. We explained that we wished to see Ambassdor Margaret Scobey to discuss why Egypt had prohibited more than 1,300 persons including hundreds of Americans, from going to Gaza to take part in a peaceful march with Palestinian civil society against the siege of Gaza.

We were allowed through the first checkpoint, but told we would have to be sniffed by dogs. But as the dogs finished their task, an Egyptian police officer came running up, and demanded we leave. We stood our ground. We explained that we were Americans, and wanted to visit our embassy. If they would not let us, then they must send someone out to explain why.....

Eventually, a representative of the embassy emerged and stated that three and only three persons would be allowed to enter. Through an on-the-spot, ad hoc process, CODEPINK cofounder Medea Benjamin, activist Kit Kettredge and myself were selected. We made clear to other marchers that we did not view this "concession" as binding them in any way -- they still had the right, as they demanded, to visit the embassy and represent themselves, and we would make that point......

We noted the irony that it was in Cairo last June that US President Barack Obama had lauded and recommended to Palestinians peaceful civil-rights-style actions. And yet here were 1,300 individuals from dozens of countries who had answered such a call from Palestinian civil society only to find their plans blocked by the Egyptian government while they faced constant police harassment.

Cabrera reminded us, "US citizens have been hurt in Gaza, you know, so we are concerned about your safety." To this, I answered that I knew that Rachel Corrie, a 23-year-old American peace activist, had been killed by Israeli occupation forces in Gaza on 16 March 2003, and that the embassy's protestations of concern for our safety would be much more convincing if the United States government had demanded proper accountability from Israel in her killing. Benjamin, Kettredge and I also pointed out that the main source of danger to people in Gaza is from attacks by Israel using weapons provided by the United States.....

...an Egyptian who worked for the embassy -- rushed up shouting at the police in English "no touch, no touch!" This seemed to indicate that while the embassy was content to have us detained against our will for hours, it did not want us treated "too" roughly. (Indeed, journalist Sam Husseini recorded on his blog an Egyptian police official outside the embassy saying that the US embassy "told us" to prevent Americans from reaching the building.)

....Having been held hostage, we were forced to negotiate our own release. It was a lesson -- if we needed one -- that when it comes to the siege of Gaza, the United States government is not part of the solution, but an active part of the problem. And, the United States is not beyond relying on the repressive police tactics of the Egyptian state to protect itself from the opinions of its own citizens."
Posted by Tony at 6:33 AM