The "Little Saddam" Doesn't Learn From What Happened to the Big Saddam.... 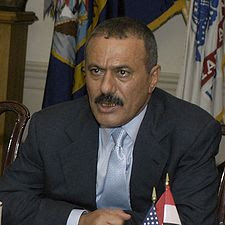 ".....But now, some of Saddam Hussein’s top spies, having fled to Yemen when America invaded, have found a new and unlikely ally in the United States, which is recruiting them into a rival spy agency within the Yemeni government, created specifically to tackle al-Qaeda.
The Ba’athist spy agency was created at the behest of the US, but it likely didn’t take much coaxing of Yemeni President Saleh, a long-time ally of Saddam Hussein who has been known as “little Saddam” himself.
Though it is perplexing policy when coupled with repeated official statements against the Ba’athists, it is hardly surprising that the US has once again gone down this road, having eagerly allied with Saddam’s Ba’athist regime before eventually declaring it an enemy and invading. Whether the Saleh government will share the Saddam government’s fate remains to be seen."
Posted by Tony at 6:06 AM