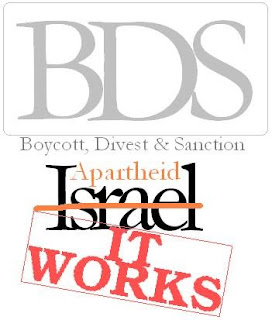 "Despite Israel's siege of Gaza, and the escalating displacement in the Negev and East Jerusalem, Palestinians have some reason to celebrate. In Washington a food co-op has passed a resolution calling for a boycott of Israeli products, confirming that the boycott movement – five years old last month – has finally crossed the Atlantic. Support for the move came from prominent figures including Nobel peace laureates Desmond Tutu and Máiread Maguire, and Richard Falk, the UN's special rapporteur on the Palestinian territories.
The movement for boycott, divestment and sanctions (BDS) against Israel was launched in 2005, a year after the international court of justice had found Israel's wall and colonies built on occupied Palestinian territory illegal. Over 170 Palestinian political parties, unions, mass movements and NGOs endorsed the movement, which is led by the BNC, a coalition of civil society organisations....
Boycott from Within, a significant protest movement in Israel today, was formed in 2009 adopting the Palestinian BDS call.
A bill that would impose heavy fines on Israelis who initiate or incite boycotts against Israel has recently passed an initial reading at the Knesset. This underlines Israel's fears of the global reach and impact of BDS as a non-violent, morally consistent campaign for justice. In many ways, it confirms that the Palestinian "South Africa moment" has arrived."
Posted by Tony at 3:26 AM