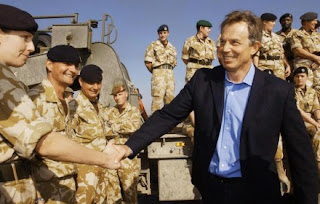 Hans von Sponeck, UN humanitarian co-ordinator from 1998-2000, demands answers from the former prime minister to a simple question: Why is Iraq in such a mess?

"....My predecessor in Baghdad, Denis Halliday, and I were repeatedly barred from testifying to the Security Council. On one occasion, the US and UK governments, in a joint letter to the secretary general, insisted that we did not have enough experience with sanctions and therefore could not contribute much to the debate. You were scared of the facts.

We live in serious times, which you helped bring about. The international security architecture is severely weakened, the UN Security Council fails to solve crises peacefully, and there are immense double standards in the debate on the direction our world is travelling in. A former British prime minister - "a big player, a world leader and not just a national leader", as you describe yourself in your book - should find little time to promote his "journey" on a US talk show. You decided differently. I watched this show, and a show it was. You clearly felt uncomfortable. Everything you and your brother-in-arms, Bush, had planned for Iraq has fallen apart, the sole exception being the removal of Saddam Hussein. You chose to point to Iran as the new danger....."
Posted by Tony at 4:46 AM