'We were looking for a nice, peaceful place near Jerusalem' 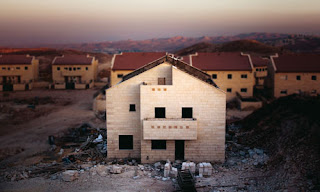 If the construction of settlements in the West Bank is meant to be on hold, why are Israeli buyers being offered new properties on Palestinian land at knock-down prices?

"The housing project currently under construction in Almon offers enticingly priced, spacious family homes with a garden and a view. The surrounding neighbourhood, also known as Anatot, sits on a ridge overlooking the Judean hills, near Jerusalem, a blaze of cultivated greenery in the parched landscape. Residents have a relaxed air, and newcomers who have recently relocated from Jerusalem wish they'd made the move years ago. If I were a prospective house-buyer, I'd be charmed. But I would not be looking here – because Almon is in the occupied West Bank.....

How hard would it really be to divert funds from the occupied West Bank back into Israel, thus encouraging settlers to move back – especially from somewhere like Almon, where residents have already said they will relocate if political realities dictate that they should?....."
Posted by Tony at 9:27 AM