What will the Arab public think?

"Most Arab leaders want the US to tackle Iran, even to wage a war against the country, but evidently do not say so publicly for fear of Arab public opinion and reaction. 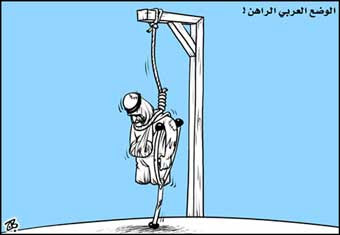 Confidential cables by American diplomats in the region, revealed by WikiLeaks, expose weak and fearful Arab leaders who are dependent on US protection against real and imagined fears over Iran's potential possession of nuclear arms and its influence in the Arab world.

Although the hostility of Arab leaders towards Iran is not a secret, the documents published by a number of Western newspapers show that some Arab governments appear more concerned with Iran than Israel; for while Israel is seen as an enemy that occupies Arab land and may cause instability in the region, Iran is feared as a country that could mobilise Arab public support against their leaders.

In their conversations with American officials, Arab leaders refer to Iran as "a snake", "evil" and "an octopus whose tentacles need to be severed" - presumably they are far more cautious in their labelling of Israel when talking to US diplomats.....

In the disclosed documents several Arab leaders sound unsure and lacking in self-confidence as they express concern that US engagement with Iran will fail to contain "the Iranian threat" and urge the US to stop Iran "at any cost". What is most striking is that some Arab officials appear to believe that the cost of war against Iran, in terms of regional instability, is less than the cost they may pay if Iran is "not stopped"[this is exactly the Israeli line!].....

The WikiLeaks revelations will further erode the image of Arab leaders in Arab public opinion and make it more difficult for them to publicly advocate a war against Iran. Even if some of the fears expressed by Arab leaders are shared by segments of the Arab people, any official Arab attempt, beyond the closed doors of meetings with US officials, to make Iran, rather than Israel, the enemy will backfire."
Posted by Tony at 3:18 AM