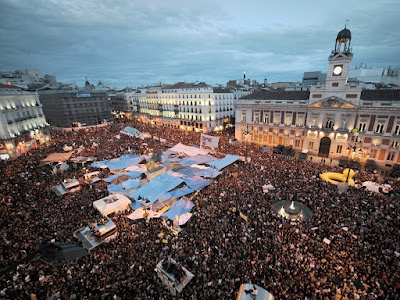 (Click on photo to enlarge)
By Pepe Escobar
Asia Times

"...The exhilarating northern African winds of the great 2011 Arab revolt/spring have crossed the Mediterranean and hit Iberia with a vengeance. In an unprecedented social rebellion, the Generation Y in Spain is forcefully protesting - among other things - the stinging economic crisis; mass unemployment at a staggering 45% among less than 30-year-olds and the ossified Spanish political system that treats the citizen as a mere consumer.....

Outraged of the world, unite

They call themselves los indignados - "the outraged". Puerta del Sol is their Tahrir Square, a self-sufficient village complete with working groups, mobile first-aid clinic, and volunteers taking care of everything from cleaning to keeping an Internet signal. The May 15 movement - or 15-M, as it's known in Spain - was born as a demonstration by university students which spontaneously morphed into an open-ended sit-in meant to "contaminate" Spain via Facebook and Twitter and thus turn it into a crucial social bridge between Northern Africa and Europe....

So this goes way beyond a student revolt. It's a revolt that lays bare a profound ethical crisis convulsing a whole society. And it goes way beyond the economy; this is a movement seriously inquiring over the place of human beings in turbo-capitalist society....."