The battle for Libya: Up in smoke 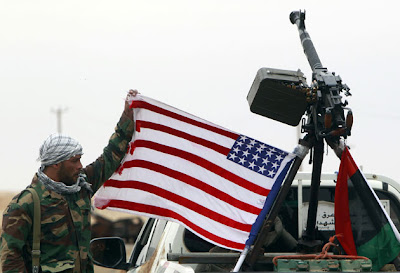 If Libyans let the West completely control the war, the country risks receiving a 'bill' at the end that it cannot pay.

"It was meant to be rapid, unburdened by collateral damage or ethical liability and in support of a worthy cause: Ridding Libya of Gaddafi as a helping hand for the spectacular Arab Spring.

In reality, the battle for Libya is everything but that. It is progressing slowly and remaining inconclusive. Worse, its collateral damage has been mounting, and consequently the ethics are beginning to look shaky. The word muddle comes to mind.

And there are five questions that urgently need answers.

While there are plenty of differences between Libya and Iraq, there is an 'oil' connection that justifies the comparison....

NATO vs Gaddafi: What are the options?

If Libya is to be a testing ground for western military hardware and European hard-power, the agenda of the mission would eventually be totally altered from protection of civilians to a grand scheme increasingly hinting at imperial designs....

Libya: Whose battle is it anyway?

The battle for Libya increasingly tempts one to ask who is pulling the trigger. Leaders of the Transitional National Council undoubtedly do a great deal of lip-shooting, and obviously the weak rebel forces do a bit more.

The Libyan agency in charge of deciding the conduct of the war and its overall strategic aims seems to be quickly falling under the influence of powers who provided the expensive, state of the art weaponry that is being used to execute the bulk of the fighting.

Already the conflict has changed. It has no relation to any pretences of an Arab Spring or a democratising agenda.

Libyans who oppose Gaddafi have to ask themselves an important question: Who is running the battle and why?

Even more importantly, what is the price of delegating the war against Gaddafi to the West? In international politics there is no such thing as a free lunch, so to speak....."
Posted by Tony at 4:01 PM