'One, one, one, the Syrian people are one' 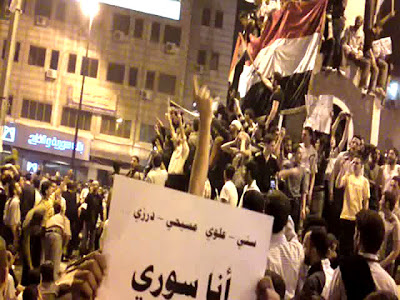 Mohja Kahf
(Dr Mohja Kahf is associate professor of comparative literature at the University of Arkansas and author of the novel, The Girl in the Tangerine Scarf, about a Syrian girl growing up in the United States. She tweets Syrian revolution news @profkahf.)
guardian.co.uk, Saturday 28 May 2011

"President Bashar al-Assad and many of the senior figures in his regime belong to Syria's minority Alawite sect, but that does not mean Assad or his regime represent the Alawites.

The government is playing a dangerous sectarian game, pointedly targeting Sunni areas and practices for attack while shackling traditionally Alawite villages against joining the protesters. Meanwhile, it is trying to ignite Alawite fears and manipulate Alawite communities to act on those fears.

Given this, any instance of Alawite silence is difficult to interpret; it may indicate a lack of support for the revolution, though, on the other hand, it may even signify defiance of the regime.
Yet Alawites have by no means been silent – many have been active in the opposition – and the pro-democracy movement as a whole rejects claims by Syria's state-run television that it consists of religious fundamentalists seeking to replace the regime's ostensible secularism with an Islamist state.

The protesters' chants consciously emphasise national unity, such as: "One, one, one, the Syrian people are one." Now is the time for Sunni Syrians opposing the regime to step up to even greater solidarity with the Alawites.....

And if anyone in the free Syria that is coming ever tries to target the Alawite community, I will bar them with my body and soul. That goes for Christians, Kurds, and any other ethnic or religious minority in Syria. "The test of courage comes when we are in the minority," Ralph Sockman says. "The test of tolerance comes when we are in the majority."

I have not lived as part of a religious minority and an ethnic minority in the US for 39 years, slugging through the Federalist Papers on how to protect minority rights in a democracy, and learning the lessons of the civil rights movement the hard way as a Muslim American and an Arab American, to see any minority hurt in democratic Syria.

Civis Syrianus sum – I am a Syrian citizen."
Posted by Tony at 4:49 AM