The age of the Reaper 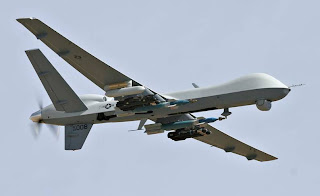 "For the MQ-9 Reaper drone that struts its stuff equipped with Hellfire missiles and rains death from above, the sky, literally, is the limit. It's expanding its footprint from AfPak to the whole of East Africa up to the Gulf of Aden. The Reaper, though, can also wear a business suit and incorporate the persona of the president of the United States.....
Yet a glance at the map, comparing the erosion of Palestinian land from 1946 to 2011, is enough to show Israel has already killed the two-state solution, regardless of what happens at the UN.

And all this while from northern Africa to the Middle East multitudes are fighting for the same "freedom" Americans (and Israelis) apparently enjoy, but are forever denied to Palestinians.

Whatever happens at the UN, Israel's got the deal of the century. Under the cover of a return of the living dead "peace process", successive Israeli governments get to steal Palestinian land, build illegal settlements and procrastinate, while the US pays the heavy political price......

He may be a MQ-9 in AfPak or in the new Seychelles-Somalia killer route. He may be channeled by the president of the United States. And he may answer by the name of Bibi. He's here, there, everywhere. Fear the Reaper. Or else ..."
Posted by Tony at 3:12 AM