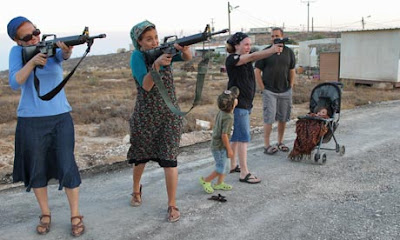 "The settlers come down the hill from the outpost, mostly on foot, but occasionally on horseback or in tractors or 4x4s. They carry Israeli flags, and sometimes bring guns, shovels and dogs. There may be as few as three or as many as 40. They taunt the local villagers and sometimes attack them. Often the Israeli army arrives and trains its weapons on the villagers.

In Qusra, deep among the terraced hills of the West Bank, fear is on the rise. "The settlers are provoking us continuously," said Hani Abu Reidi, head of the village council. "They uproot olive trees, kill our sheep, burn our mosques and curse our prophet. They want to drag us into the sphere of violence. We do not want to go there."

As the Palestinian quest for statehood looks set to be mired in diplomatic back rooms for weeks or months, tension on the ground is mounting.....

The settlers are not just fighting to hold on to the land they already occupy; they intend to expand and grow – as they see it, reclaiming the land that has been willed to them by God.

"Our purpose is to build new towns and communities, new outposts in Judaea and Samaria," said veteran activist Daniella Weiss. "It's our role as Jews to build the land of the Jews."

In Qusra, Abu Reidi agreed the land is at the heart of confrontations between Jewish settlers and Palestinian villagers.

"Their ultimate goal is to drive us from our land," he said. "Defending the land is a holy task. If we let them succeed, they will take more and more.""
Posted by Tony at 8:25 AM

Palestine? Why not look ahead to a Nirvana without conflict, a future full of happiness and health. Separate State power from Religious control and put first the needs of your children. Not the pride of old wounded egos who would rather sacrifice Palestine's future to satisfy a sick belief that the deaths of many more people will somehow atone for their mistakes and evil doings.

People of Palestine - with love you will win your right to peaceful co-existence with those around you. With hatred your pain and persecution will continue.

From an Australian so far away - but is struck down every time a Muslim Brother or Sister perishes for the sake of a boundary drawn by the pride of sick, power-hungry men.