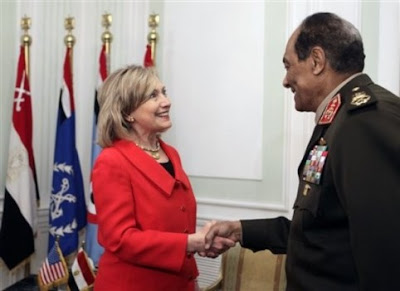 "CAIRO: The video went viral. A veiled woman dragged through the street by soldiers hitting her with sticks, ready to smash her with their boots and her dress being opened to reveal the now iconic blue bra that has left Egyptians angry. On Monday, Hillary Clinton blasted Egypt’s ruling military junta for its treatment of women, calling it “shocking.”
Other women, including an elderly woman, have been attacked in the recent clashes in downtown Cairo, in what activists are calling indiscriminate attacks against civilians by the armed forces, which have left over a dozen killed and hundreds injured.
“This systematic degradation of Egyptian women dishonors the revolution, disgraces the state and its uniform and is not worthy of a great people,” Clinton said in a speech at Georgetown University.
It was arguably the first time an American official has lashed out at their military ally in Egypt, but the recent spate of violence, and especially the violence directed and women, appear to have finally gotten Washington’s attention.....
“Women protesters have been rounded up and subjected to horrific abuse. Journalists have been sexually assaulted and now women are being attacked, stripped and beaten in the streets.”"
Posted by Tony at 4:31 AM