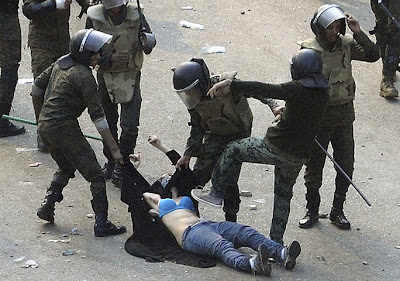 "....They beat up a newly elected young member of parliament, jeering: "Let parliament protect you, you son of … ". They took a distinguished older lady who's become known for giving food to the protesters and slapped her repeatedly about the face till she had to beg and apologise. They killed 10 people, injured more than 200, and they dragged the unconscious young woman in the blue jeans – with her upper half stripped – through the streets.
The message is: everything you rose up against is here, is worse. Don't put your hopes in the revolution or parliament. We are the regime and we're back.

What they are not taking into account is that everybody's grown up – the weapon of shame can no longer be used against women. When they subjected young women to virginity tests one of them got up and sued them. Every young woman they've brutalized recently has given video testimony and is totally committed to continuing the struggle against them.