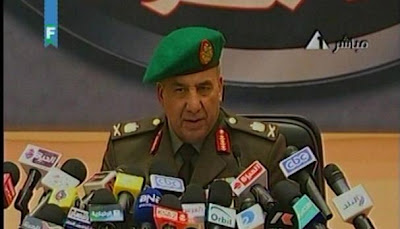 "CAIRO: A United States government official lashed out on Tuesday over an Egyptian military general calling for Egypt protesters to be thrown into “Hitler’s ovens.”

“Anti-Semitic comments are outrageous, offensive and clearly unacceptable,” Hannah Rosenthal, the US special envoy against anti-Semitism, wrote on Twitter in response to what has quickly become an international gaffe.

General Abdel Moneim Kato was addressing reporters, who criticized the military for attacking protesters, wondering why they care about a “bunch of kids who should be burned in Hitler’s ovens.”

Potential presidential candidate and human rights defender Mohamed ElBaradei condemned the statement, saying that the general should be in prison and not in power.

He wrote on his personal Twitter account, where almost half a million people follow him on the micro-blogging site, saying that the general’s “kind” should be sent to jail.

“The Egyptian military should not leave its soldiers subject to directives of this official who does not hesitate to declare Nazi opinions that incite hatred and justify violence against citizens he disagrees with,” said ANHRI in their statement.

ANHRI said that anyone who makes such irresponsible remarks should be held accountable for them.

“His opinions that call for pursuing Hitler’s approach, even metaphorically, are behind the excessive and atrocious violence against Egyptian protesters, as seen in online videos and in newspapers by millions of people.

“Even if some of the protesters were at fault, or were responsible for whatever is attributed to them, the violence committed by the party entrusted to protect them cannot be justified,” the ANHRI statement continued."
Posted by Tony at 4:21 AM