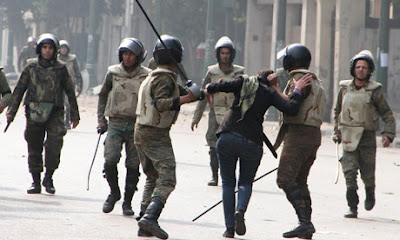 "The woman photographed being beaten in Cairo is an activist who does not want her name revealed because of her shame at the way she was treated, according to those who were with her at the time.

Hassan Mahmoud, a journalist with the newspaper Al Badeel who was there, said the woman stumbled as she tried to flee from the military police, who managed to grab her and beat her. "It was clear to me that they wanted to take her away from us but then a few brave protesters came in and started hurling stones and that was the one thing that saved her from their hands."

He said she was treated for hand and leg wounds, then taken to a centre for rehabilitation of violence victims called El Nadeem Centre, before being taken home where she was said to be feeling wretched about her treatement.

Though her case was drawing comparison with the instant fame accorded posthumously to Neda Agha Soltan, the Iranian woman killed during the 2009 uprising, the woman appealed for her identity to be kept secret.

Mahmoud said she told him: "It doesn't matter if I talk [to the media] or not, their stripping me is enough to reveal them [the army] and tell enough to those who still believe them."...."
Posted by Tony at 6:52 PM