Who Are the Palestinians 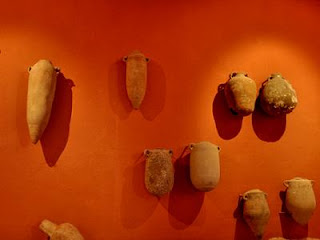 "...
Who Are the Palestinians?

They are the descendents of all the groups that inhibited Palestine since the ancient Canaanites and beyond. Palestine was successively conquered by Canaanites, Philistinians, ancient Hebrews, ancient Egyptians, Persians, Greeks, Romans, Byzantines, Muslims, Crusaders, Ayyobies, and Turks. The groups which lived in Palestine fought, inter-married, collaborated and no group was obliterated.

We can’t explore at length several millennia of uninterrupted history of the Palestinians in one article or even in one book, but this narrative is an attempt to review some archeologists’ findings and Ancient Egyptian hieroglyphic texts about the Canaanites, the first inhabitants of Palestine. Ancient Egyptians who had personal contacts with the Palestinians through commerce and military campaigns have been credited for providing partial answers to the question of who were the early Palestinians. Modern archeologists have unmasked evidence from the annals recorded on clay and early bronze pottery that Egypt was involved in Palestinian and Syrian affairs during the First and Second Egyptian Dynasties 3100-2686 B.C.....

The Palestinians today do not only have to suffer living under military occupation or as refugees, but to add insult to injury, Newt Gingrich, an American politician who will do anything including selling his soul to get a vote, said “the Palestinians are an invented people.” The archeologists’ findings and Ancient Egyptian hieroglyphic texts suggest the Palestinian People existed long time before the Americas were discovered and when Newt Gingrich European ancestors were living in caves."
Posted by Tony at 7:04 AM