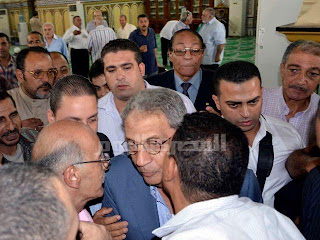 Some minor altercations broke out at Omar Makram mosque, which is located in Tahrir square, between worshipers supporting and opposing Moussa's presence.

Opponents of Moussa's presidential bid often accuse him of being associated with the former regime of President Hosni Mubarak.

The imam of the mosque, Mazhar Shahin, angered many after welcoming Moussa to Friday prayers. One person shouted through a loudspeaker: “We will not welcome the remnants of the former [Mubarak] regime who corrupted Egypt during his rule.”

Moussa's opponents stood in front of the mosque and chanted, “Down with military rule,” “Down with the remnants [of the former regime],” and “Down, down, Amr Moussa.”

Moussa refused to comment on the incident. He left the mosque quietly and headed to Doubbara Palace church, which is located about 50 meters from the mosque, to congratulate Copts on their Christmas celebration.

Moussa served as foreign minister under Mubarak from 1991 to 2001, and then as secretary general of the Arab League from 2001 until last May.

Young activists have repeatedly protested at Moussa's campaign rallies, beginning when he announced his intention to run for president at El Sawy Culture Wheel in Zamalek last March. These disturbances eventually prompted Moussa to issue a statement in May accusing “rioters” of concocting a plan to disrupt his campaign."
Posted by Tony at 3:54 AM