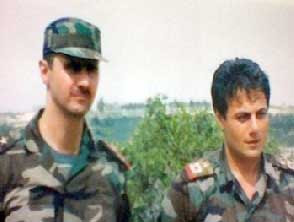 "A Syrian general who was a leading member of Bashar al-Assad's inner circle, Manaf Tlass, has defected to Turkey, according to a Damascus-based website with close links to the regime.

Tlass is a member of the most powerful Sunni family in Syria, and the son of a long-serving former defence minister, Mustafa Tlass, but he was reported to have fallen out of favour in recent months for refusing to take part in attacks on civilian areas regarded as opposition strongholds.

Tlass's defection was reported by Syriasteps, a news website linked to the country's security apparatus. It said that "a highly placed source in intelligence has confirmed that General Manaf Mustafa Tlass has fled to Turkey", and quoted a security official as saying: "His escape does not mean anything."

The defection of such a high-profile figure from a family at the heart of the regime would be a damaging blow to Assad and could provoke more defections, especially among more junior Sunni officers and rank-and-file soldiers. That would serve to weaken the security apparatus, but at the same time sharpen the sectarian nature of the conflict between the Sunni majority and the Alawite minority, from which the ruling family and the military elite are drawn.
A Turkish government official confirmed that two Syrian generals had defected in the past three days, but did not provide names "for their and their families' security".

One of the two generals the official referred to is from an engineering division. The second is believed to be Tlass, who is a general in the Republican Guard.

Rami Abdul-Rahman, the head of the London-based Syrian Observatory for Human Rights, said: "Several sources inside Syria, including Alawite sources close to the regime, have confirmed to me that Manaf Tlass has left the country.".....

The steady stream of defections are just one sign of the Assad regime's gradually eroding power. A senior British diplomat said it was also losing its grip on territory.

"What is clear is that the regime has lost control of parts of the country, particularly in the east. It's also clear that parts of Damascus have got more difficult for the regime, but we don't have a precise map … but I'm not sure it's true that the opposition are in full control themselves in a coherent way," the diplomat said......"
Posted by Tony at 3:47 AM