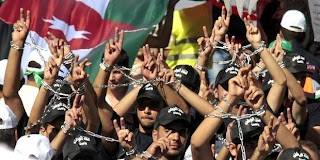 "The Jordanian authorities must end their crackdown against pro-reform activists and allow them freely to express their views, Amnesty International said.

Twenty detainees – all members of pro-reform groups - were arrested across the country between 15 July and 4 October 2012 either during or following peaceful protests throughout the country, calling for legal and economic reforms, greater political freedoms, and an end to corruption.

“Amnesty International calls on the Jordanian authorities to release all those held solely for exercising their right to freedom of expression, association and assembly immediately and unconditionally,” said Ann Harrison, Amnesty International’s Deputy Programme Director for the Middle East and North Africa.

“King Abdallah’s open letter this week to the incoming Prime Minister, emphasizing the ‘government’s responsibility to respect freedom of expression … and the right to peaceful protest’, is at odds with the punitive measures we are seeing imposed on peaceful protestors.”......"