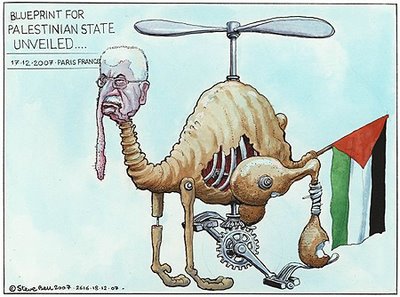 ".....Of course, there are reasons to permit a degree of hope — no thanks to the very entity that guarded Israeli interests in the Occupied Territories for all of these years. It is simply gratifying to witness the global show of solidarity with the Palestinian struggle, one which has always existed, but was overshadowed by futile “peace talks” and US-hegemony over all Middle Eastern conflicts.

Moreover, the support that ‘Palestine’ has received at the UN must be heartening, to say the least, for most Palestinians. The overwhelming support, especially by Palestine’s traditional allies (most of humanity with few exceptions) indicates that the US dominion, arm twisting and Israeli-US propaganda were of little use after all.

However, that should not be misidentified as a real change of course in the behavior of the PNA, which still lacks legal, political and especially moral legitimacy among Palestinians, who are seeking tangible drive towards freedom, not mere symbolic victories.
In fact, since the late 1970s, when the US, along with its arbitrators in the Middle East, began co-opting the PLO leadership, it has been one symbolic victory after another. When it emerged that Arafat was the PLO’s “strong-man” — a major clue for US foreign policy specialists — a decade-long charade commenced.....


These events were the real preamble to the Oslo accords a few years later. Since then, Palestinians have gained little aside from symbolic victories, starting in 1988 when the UNGA “acknowledged” the Algiers proclamation. It then voted to replace the reference to the “Palestine Liberation Organization” with that of “Palestine”. More symbolic victories followed.

While the rally of Birzeit students seemed ill-prepared and unclear on its objectives, those men and women should take comfort from the fact that they did not sing and dance as their national project was about to be methodically crushed by both Israel and the Palestinian leadership. It is strange how “symbolic” and “moral” victories can usher many years of unmitigated defeats."