After Morsi’s speech, tension and dissent rises across Egypt 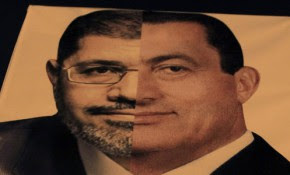 "CAIRO: A president in Egypt delivered a speech to the nation in the midst of massive protests calling for his removal. Only two years ago then-President Hosni Mubarak attempted to save his regime, but he used defiant language that blamed the unrest on the protesters on the streets, who were battling tear gas, bullets and government-sponsored attacks.
On Thursday, current President Mohamed Morsi spoke to Egyptians, but for many activists it was eerily similar to the addresses Mubarak gave during the 18 days of uprising that ended his 30-year rule over the country.
Morsi attempted to diffuse an already tense country after Wednesday saw angry Muslim Brotherhood supporters – of which Morsi came out of to take the helm as president – attack and ignite street clashes around the presidential palace, leaving at least five people dead and hundreds injured.....

Activists were angry that he never once mentioned his own political group’s involvement in the violence the day before. The activists viewed the speech as an attempt to paint the protesters calling for the withdrawal of the decree and his ouster as criminals.
A number of protesters told Bikyamasr.com that they believe the speech “was a call to attack those who disagree with him and we all fear reprisals and attacks.”
The failure to withdraw the decree and pushing on with the referendum has angered the protesters, but Morsi said that the “minority” must “follow its [majority] will.”.....

Abu Ezz al-Hariri, a member of dissolved parliament, said whoever accepts dialogue with the Mursi will “betray the revolution.”
The National Salvation Front also lashed out at Morsi, refusing any calls for discussion until the referendum is postponed and Morsi allows for judicial review of the constituent assembly that wrote the controversial constitution.
The April 6 Youth Movement, which played a leading role in the uprising against Mubarak, said in an announcement on its Facebook page that it would not join the talks and called for massive protests on Friday to show the president who was the majority.
It also said Friday’s protest would be called the “red card” for Morsi.
For many, the speech did little to change the status quo. For others it was the final straw that showed the unwillingness of the Brotherhood to compromise. And even others said the point of no return has been crossed and demanded that Morsi immediately step down."
Posted by Tony at 5:27 PM