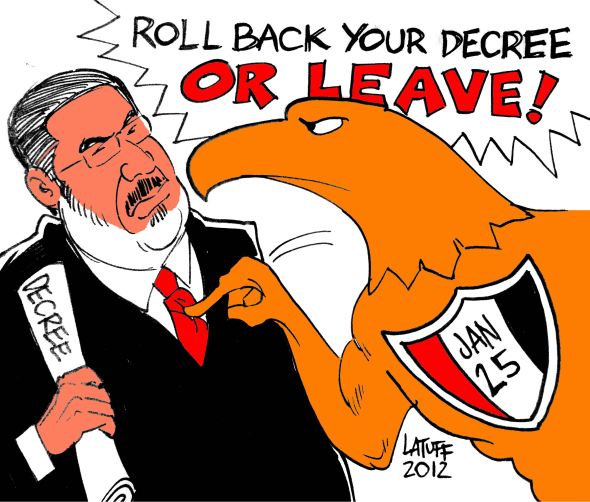 "CAIRO: Tuesday was a game-changer in Egypt. For too long, the liberals and the left had relied on Tahrir Square for their demonstrations. Marches all headed to the main Cairo square, where they would chant loudly and call for change. It might have worked in January and February 2011, but today, something different was needed. And on Tuesday, the left showed they can be creative and change the status quo of the protest movement in Egypt.
The person, or persons, responsible for convincing the protesters in Tahrir to take to the presidential palace, should be praised. Every television across the country was showing the hundreds of thousands lining the streets near the palace. There was a newfound sense of optimism that Tahrir could not longer deliver.
In a way, after two years of inconsistent protesting and chanting, the liberal movement in Egypt has evolved. By taking to the palace they showed the government and the Brotherhood that this is their country too. Reuters news agency estimated the number of protesters across the country on Tuesday to be around 25 million. That is more around one-third of the country on the streets. Even those who did not take to the streets, their support for the march on the palace, dubbed the “Last Warning,” was evident.
One waiter at a café, as we watched the beginning of the march arriving at the palace, turned and simply said, “this is revolution. I feel it.”
The inspiring move has changed the future of the country. Whether or not Morsi steps down on Wednesday, his days are more than likely numbered. He has a scheduled meeting in Washington with American President Barack Obama on December 17 – ostensibly for the US to give their stamp of approval for their newfound ally and dictator in the region – but right now, it is unlikely Morsi will make it to Washington as the head of state.
He has failed to deliver democracy to a people who elected him, albeit not because they necessarily wanted to – he won a run-off presidential vote because the other candidate was in the pocket of a military that had killed and stalled reform and change. If Morsi cannot find a way to compromise, withdraw his presidential decree that gives him power above judicial review and postpone a constitutional referendum, the opposition will not stop. Maybe we have reached the point of no return, just as we did in early February 2011, when it didn’t matter what Hosni Mubarak did, he was to be ousted from power.
The evolution of the liberal movement in Egypt and their creativity in galvanizing the masses to the streets cannot be underestimated. They have changed the layout of politics in the past 10 days. Revolution is in full force and the determination on peoples’ faces should not be seen as a passing phase. This is real. This is it.
At the same time, the media propaganda coming from the Muslim Brotherhood and the Morsi government shows they have learned little about the changes that have taken hold in Egypt for the past two years. Maybe they believed they could rule with an iron fist, give themselves absolute power and the people would follow. This is not January 24. This is the post-Jan 25 era, and Egyptians will no longer accept dictatorship and authoritarianism.
The Brotherhood on Tuesday, on their social networking sites and on state television, attempted to downplay the numbers on the streets, telling Egyptians only a few thousand were protesting. Then, on Wednesday morning, they headed back to the Supreme Constitutional Court to continue their blockade to bar judges from entering their chambers to make rulings on the legality of the government’s policies.
In many ways, Tuesday showed the true colors of the Brotherhood. They revealed that they can continue to lie to a population, fall back on an election victory that means very little today – if you abuse democratic power, the people have a right to rise up against you – and showed Egyptians that they have no desire for democracy.
And that is the struggle facing Egypt today. Egyptians want to vote. They want to have a say in their future. They want a better life. As one protester in late November told me, “you can’t have Islamic law while we are poor and hungry.” That’s right. The Brotherhood has abused their power, failed the Egyptian people, and are now facing an exodus as dishonorable as their predecessor. And they deserve it. They have failed.
Egyptian liberals have shown they can learn from past mistakes, evolving to once again take the mantle of change. The Brotherhood has shown it has done nothing but repeat the mistakes that caused this anger to erupt in the first place, on January 25."
Posted by Tony at 11:00 AM