In prison, who knows why? 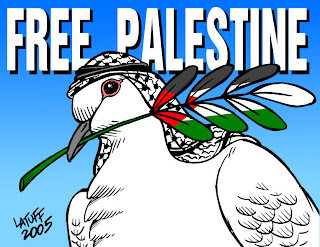 "GAZA CITY, 19 March (IPS) - You would think the baby boy named Yousef has his life ahead of him. But who knows, with a child born to Palestinian parents from Gaza. What's more, Yousef was born in an Israeli prison.

He is the only one of Fatima al-Zeq's nine children who is with her for that reason -- she was arrested nine months ago. But these days the baby is not with her. He developed stomach pain, began to vomit, and has been transferred to a hospital inside Hasharon prison in Israel.

Fatima has written to human rights organizations in Gaza asking for their help in seeing that the baby is looked after, something she cannot do herself.

Her other children do not know why mother is in prison; the Israelis haven't told them or the Palestinian authorities. And they declined to tell IPS. If anything, the Israelis say the arrests are for "security reasons.".......

Palestinians find themselves unable to invoke habeas corpus, a provision under the Geneva Convention by which a state must produce information on the whereabouts of a person within its jurisdiction. Israel denies this option on the grounds that it is not necessary for persons under administrative detention. At the moment 863 Palestinians have been in jail for more than 15 years under such detention, according to official Palestinian figures.

There are a total of 10,400 Palestinian prisoners in Israeli jails. These include 90 women and 328 children below the age of 18, according to the Palestinian Ministry of Detainees and Ex-Detainees. Forty-six of the prisoners are members of parliament, mostly members of Hamas.