The Son Who Did Not Die, The One Who Did 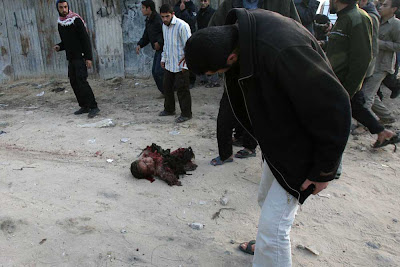 "GAZA CITY, Mar 21 (IPS) - The family had been mourning for 16-year-old Ahmed Abu Salamah. What was left of what was thought to be his body had been buried. After two weeks of mourning, they found Ahmed alive in the intensive care unit at Gaza City's al-Shifa Hospital.

But a boy had been buried. And, a family had spent two weeks outside the intensive care unit, believing the boy inside was theirs. It was their boy who had died.

The discovery of the mistake brought joy to the family of Ahmed Abu Salamah. And it plunged into uncontrollable grief the family who had gathered at hospital and prayed daily for recovery of the boy within in intensive care.

Through this misunderstanding, one thing everyone understood. The body of the boy who was buried had been mangled beyond recognition. As was the boy still alive in intensive care. 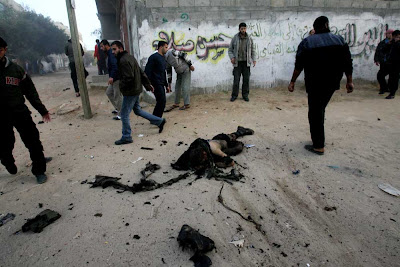 "Israel is using missiles and materials which rip apart and burn beyond recognition the humans they target, so much so that a mother can't identify the body of her own son," Dr. Raed al-Arini, head of public relations at al-Shifa Hospital told IPS.

Ahmed has suffered brain haemorrhage and has serious wounds all over his body. He had left home on Saturday Mar. 1, his mother said, and was soon hit by an Israeli F-16 missile strike just outside his house. It was a day when more than 55 Palestinians were killed, many of them civilians and children.

For three days the family could find no trace of Ahmed. Then they were called by the hospital to say that the remains of a body in the morgue was Ahmed.

But two weeks later, Ahmed's friends informed his mother Karima that her son was still alive. She rushed to the hospital. "I shook his bed, and when he opened his eyes I said to him, 'this is your mother, I'm here with you'."

The other side of this story was that of mourning after hope.

The mangled body that the Salamah family had buried was that of Mohammed Hejazi, a 17-year-old from the same neighbourhood. Mohammed's mother Aminah Hejazi and his family had sat outside the ICU everyday for two weeks, believing that the boy inside was their Mohammed.
Ahmed's face was covered by bandages. The boys were about the same size, and the Hejazi family thought it was Mohammed. "At first I doubted whether this was really my son, but I felt the need to be close to him anyway," Aminah said. But in a few days, she said she came to believe the boy inside was her son. Until the other family arrived in hospital, and the doctors broke the news to her.

Aminah sobs as she recounts that moment. The family was broken, she said. Her husband would not believe Mohammed was dead.

Identifying Ahmed finally came down to the hair. Karima said Ahmed has brown hair; Aminah that her son's hair was black.

As the Abu Salamah family did earlier, the Hejazi family set up a mourning tent to receive condolences from friends and neighbours. On the other side, many of Ahmed's friends who had thought they would never see him again, following his 'funeral', have been streaming to the hospital to look him up.

Ahmed cannot speak to his friends. He is conscious, his eyes are open, but he is paralysed, and his condition is critical. Doctors say they are short of medicines to treat him.