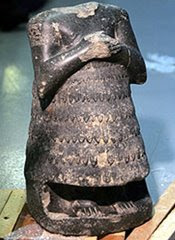 Just how bad was the looting of Iraq's museum and archaeological sites? According to Salon's experts, many ancient artifacts have come home, but the looting continues.

"Among the many unintended and unforeseen consequences of the U.S. occupation of Iraq that began five years ago this week was the wholesale looting of Iraq's museums and archaeological sites. Iraq has been called the cradle of civilization. Starting with the Sumerian civilization, which more than 5,000 years ago produced what may be the world's first examples of writing and math, the area centered on the Tigris and Euphrates rivers and known as Mesopotamia has been home to a succession of cultures -- Akkadian, Babylonian and Assyrian. Many believe southern Iraq was the site of the biblical Garden of Eden. But within weeks of the first American airstrike, the cradle of civilization had been robbed. Baghdad's National Museum of Iraq, among the globe's premier repositories of antiquities, was ransacked over the course of a week in April 2003. Statues were dragged down the steps, artifacts six millennia old were carried off in plastic bags. American soldiers were not dispatched to protect the museum until the thieves were long gone.

It was partly in response to media queries about the unimpeded looting of Iraq's cultural heritage that former Secretary of Defense Donald Rumsfeld uttered the infamous and cavalier rejoinder, "Democracy is messy." Five years after the sacking of Iraq, we decided to ask the experts how bad it really was, how many priceless antiquities have come back to their homeland, and what, if anything, has changed about the Bush administration's approach to protecting Iraq's history.

On behalf of Salon, Brian Rose, professor of archaeology at the University of Pennsylvania and president of the Archaeological Institute of America, conducted a round table with Donny George Youkhanna, former chief of antiquities for the Iraqi government and director general of the National Museum of Iraq; Cori Wegener, an associate curator at the Minneapolis Institute of Arts who, as a major in the U.S. Army Reserve, was called up in 2003 and sent to Iraq to assess the damage to the museum; and Micah Garen, a documentary filmmaker, photographer and journalist who went to Iraq shortly after the invasion to document the looting of archaeological sites. Youkhanna, who is known as Donny George in the West, was forced to flee Iraq in 2006 and is now a visiting professor at the State University of New York at Stony Brook. Wegener is presently president of the U.S. Committee of the Blue Shield, which was formed in 2006 to protect cultural property worldwide during armed conflict. Garen, who wrote a book about his experience as a hostage in Iraq called "American Hostage," is working on a feature-length documentary about the looting. The round-table participants spoke by phone on Friday, March 14. ........"

To listen to a podcast of the round table, click Here
Posted by Tony at 5:28 AM