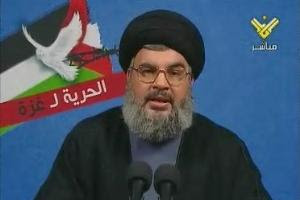 "15/12/2008 Friday will be the day to start action to end the siege of Gaza, Hezbollah Secretary General Sayyed Hasan Nasrallah announced Monday night.
In a televised speech broadcast on Al-Manar, Sayyed Nasrallah said that large demonstrations in solidarity with the oppressed Palestinians and to end the siege of Gaza will take place starting Friday after noon prayers. His eminence stressed in his speech the demonstrations are also to support the choice of resistance, steadfastness and adherence to rights regardless of the sacrifices and difficulties.......
His eminence added: “Given the military and political escalation by the Israelis as well as threats to launch a military operation against the strip, there seems to be no hope of breaking the siege in the near future. This necessitates that we contemplate and take responsibility regarding this extensive human suffering.” Sayyed Nasrallah warned against US-Israeli schemes to obliterate the Palestinian cause, the international collusion and the Arab silence with regards to the right of return of the Palestinian refugees and plans to settle them in host countries. He also warned against persevering attempts to detach Jerusalem from its Arab identity and displace the remainder of Palestinians from east Jerusalem.
“Our essential goal is breaking the siege and putting an end to the humanitarian tragedy of the people who stood steady despite the world’s collusion and the Arabs’ silence.”

"What Livni said was not a slip of the tongue," Sayyed Nasrallah warned.
On Thursday, Livni drew criticism for saying "my solution for maintaining a Jewish and democratic state of Israel is to have two distinct national entities." "And among other things I will also be able to approach the Palestinian residents of Israel, those whom we call Arab Israelis, and tell them: 'your national aspirations lie elsewhere,'" Livni said.

Sayyed Nasrallah said that the goal of besieging Gaza was to break the will of the Palestinian people and frustrate it to impose US and Israeli conditions in line with the “humiliating settlement process that does not preserve the least rights of this people.”

The Resistance chief urged Egypt to take a historic and brave decision to permanently open the Rafah crossing for Gazans. He called on the Organization of the Islamic Conference and the Arab League to stand by Egypt should it takes this step. “Abiding by the checkpoint agreements [Egypt and Israel share] has no moral, ethical, legal or religious basis if it leads to a major humanitarian crisis and if it results in a war crime. I address Egyptian officials and say: yes brothers, this is not the time for outbidding for we are in front of a painful truth where hundreds of ill Palestinians are dying and hundreds of thousands others are living in darkness and starvation, so this requires a historic position from your side and the whole nation will support you should you take it.” “There are a million and a half Muslims in Gaza who call on us to assist them and it is our religious and human duty to respond,” he said.

"Had the Arab leaders acted responsibly 60 years ago, Palestine would not have been conquered," he continued. "I ask all those who are proud to be Arabs, where is your Arab sentiment now, as a million-and-a-half Arabs in Gaza are under siege? I call on you to take part in the rallies and join us in this call," Sayyed Nasrallah said."
Posted by Tony at 4:20 AM