Keep out... a message for foreign leaders 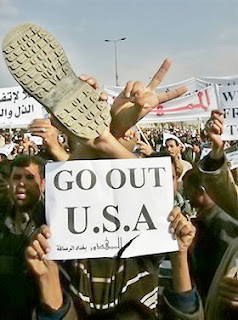 I used to think that all these official visits did little harm, even if they did no good

".....Official press conferences of any kind seldom produce real news, but the worst are usually those given by foreign leaders on trips abroad in which they and their local ally suggest that they are in control of events and all is going according to plan.

One of the many infuriating, though also ludicrous, events in Iraq since the invasion of 2003 has been American and British leaders, arriving in secret at the enormous US base at Baghdad airport and travelling, accompanied by numerous armed guards, by helicopter to the heavily-fortified Green Zone. After a few hours there they would give upbeat press conferences, sitting alongside the Iraqi leader of the day, claiming significant improvements in security and chiding the assembled journalists for ignoring such clear signs of success.

Periodically reality would break in, such as the time a mortar bomb exploded nearby the press conference hall at the very moment when UN Secretary General Ban ki-Moon was lauding security improvements, compelling him to cower down behind a display of artificial flowers......

One small lesson of the debacle in Iraq might be to cut back on these official visits such as those by Mr Bush and Mr Brown last Sunday. In Islamabad Mr Brown's demand for a crack down on terrorism makes any action taken by the host government look as if it is cravenly acquiescing to a foreign power. In Baghdad Mr Bush could see for the first time in five years, in the shape of pair of shoes hurtling towards him, what so many Iraqis really think of him."
Posted by Tony at 3:19 AM