"We are going to Gaza" 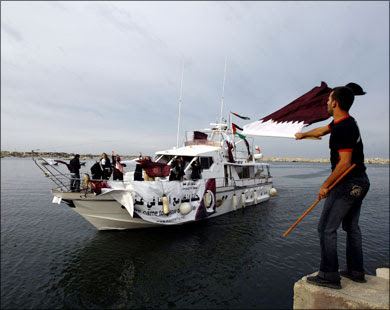 (Gaza Port, Gaza, 20 December 2008) The DIGNITY pulled into Gaza Port at 8:00 am today after the Israeli Navy threatened to board them and take the two Israelis off the boat. "We know you have Israelis on board, so either turn back, or we will board and take them off," said the voice on the radio.

"We are going to Gaza," Huwaida Arraf, the delegation leader, replied.

Neta Golan, one of the Israelis on board and a co-founder of the International Solidarity Movement stated, "Countries that commit crimes against humanity often hide those crimes from their own people. Israel is doing exactly that, by not allowing Israelis to come in to witness what they are doing in our name."

The Dignity also carries two envoys from the Eid Charity in Qatar who are going to Gaza to assess the tragedy there. They will go back with concrete proposals on what they can do to help alleviate Israel's collective punishment of the 1.5 Palestinians.

"This is just the beginning. We are delighted that we are finally able to see the shores of Gaza and be the first Arab envoys to arrive. We will see how we can work together to help relieve this terrible situation in Gaza," said Alaze Al-Qahtani.

This is the fifth voyage for the Free Gaza movement. "Everyone said it couldn't be done, that we would never be able to get to Gaza. But we have now arrived for the fifth time. Now, other ships, especially cargo ships, need to follow in our wake," said Darlene Wallach, one of the internationals kidnapped from a Palestinian fishing boat by the Israeli navy on l8 November......"
COMMENT: These people of The Free Gaza Movement are just amazing. Their dedication, intelligence, courage, organization, etc is a shining example to all of what is possible!
Posted by Tony at 7:13 AM