Sun Sets On an Encircled Town 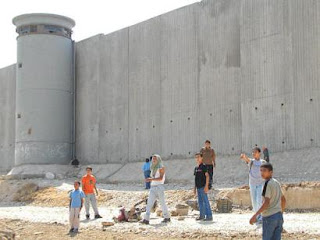 "QALQILYA, West Bank, Dec 19 (IPS) - Qalqilya has been an encircled town since the Israeli West Bank barrier was built around it in 2003. Only one narrow gate guarded by Israeli soldiers allows access.

The anger, disbelief and protests over this situation have become muted. The people of Qalqilya are waking up to the reality of near imprisonment. The town's legislators spend most of their time in Israeli prisons without being charged of anything.

"The wall is killing the people of Qalqilya", says Emat, a 25-year-old shopkeeper. "Nothing comes in, nothing goes out, we can't make a living. The people here are almost dead."

Behind Emat's empty street is the entrance to the daily vegetable market. A quiet one by Arab standards, with a total of about 20 vegetable stalls. Ten years ago, thousands of Israelis came to this market, making Qalqilya the richest city then in the West Bank.

The economic damage caused by the wall has been enormous, says deputy mayor Dr. Mohammad Hashem Al-Masri ...."
Posted by Tony at 3:50 AM