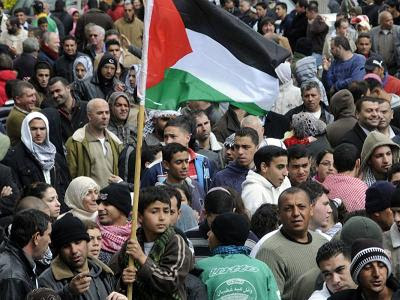 'They hope they can erase our Palestinian identity by making us love the anthem.' (UPI)
By Jonathan Cook - Nazareth
Palestine Chronicle

"A leading Arab educator in Israel has denounced the decision of Gideon Saar, the education minister, to require schools to study the Israeli national anthem.

Officials announced last week that they were sending out special “national anthem kits” to 8,000 schools, including those in the separate Arab education system, in time for the start of the new academic year in September.

The kits have been designed to be suitable for all age groups and for use across the curriculum, from civics and history classes to music and literature lessons.

The anthem, known as Ha-Tikva, or The Hope, has long been unpopular with Israel’s Arab minority because its lyrics refer only to a Jewish historical connection to the land.

Mr Saar’s initiative is widely seen among Israel’s 1.3 million Arab citizens as a further indication of the rising nationalistic tide sweeping policymakers........"
Posted by Tony at 4:16 AM