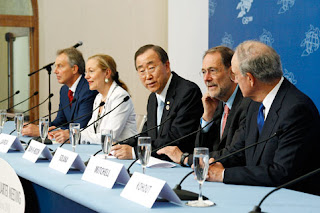 "European Union foreign policy chief Javier Solana surprised observers on 11 July when he called, during a speech in London, for the UN Security Council to recognize a Palestinian state by a certain date even if no agreement had been reached between Israelis and Palestinians.

On its face, this proposal sounds dramatic......

.....Instead, Solana seems to be calling for the UN to endorse vague ideas and start again an entire process that has proven totally misguided and fruitless. The real worry, however, is that Solana, who has always taken his political cues from Washington, is launching a trial balloon. He may be proposing a course of action to save the Obama administration from the failure of the process being conducted by US Middle East envoy George Mitchell.

It is not far-fetched to imagine the United States, which effectively controls the Security Council, proposing a resolution embodying Solana-like ideas, and packaging this as being part of a new US commitment to international joint action and legitimacy. The Palestinians will be presented with a fait accompli where they will be told that any demands for the their legitimate and inalienable rights beyond what the resolution contains are now invalid......"
Posted by Tony at 5:59 AM