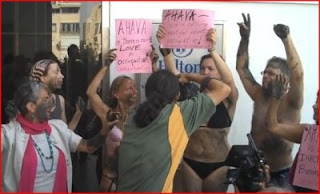 "Dozens of international women of the Code Pink antiwar movement, protested on Wednesday against the purchase of “Ahava” products manufactured by an Israeli company in Mitzpe Shalem settlement. Wearing bikinis and swim suits, the protesters demanded a boycott of the company that uses Palestinian natural resources in the occupied West Bank.

The protestors gathered near cosmetic stores in Washington. They wore bikinis and splashed their bodies with mud referring to the ‘dirty work’ of the Ahava Company.

The movement announced that Israel is stealing the Palestinian natural resources and producing its Dead Sea products at the settlement.

The campaign, known as “Stolen Beauty”, was launched last month against the company which exports its products to 25 countries.

Paris Marron, the national online organizer of Code Pink, said that Ahava Company claims that it is devoted to beauty and purity, but at the same time it acts against the international law.

Rae Abileah, a member of the movement, said that Code Pink is launching an international campaign against the products of the company in protest to its illegal activities in occupied Palestinian territories. She added that the activists handed store managers letters that included factual information about the production process, and demanded that they stop selling Ahava products as they violate the Geneva Convention.

It is worth mentioning that Code Pink urged Kristen Davis, star of the “Sex and the City” to stop representing Ahava.

The campaign against Ahava Dead Sea products held its first protest over a month ago. The protest was held at the Hilton Hotel in Tel Aviv, in cooperation the coalition of Women for Peace. Israeli sources reported that the protestors managed to close the Ahava store for a whole day, an issue which encouraged them to push for activating the boycott campaign in stores in the United States....."
Posted by Tony at 6:43 AM