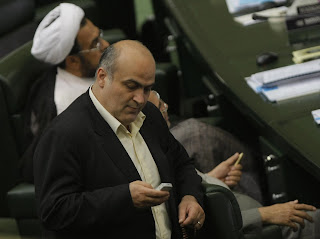 "While Jews were hurt by European churches during the Middle Ages, no case of a crackdown against Jews by Muslims has been reported in historical records," Siamak Morsadegh said in a conference on religious minorities that was held in Paris on Saturday. Iran's embassy in France had organized the conference that brought together a number of French intellectuals and scholars.

"Jews have been in Iran for the past 3,000 years, they consider themselves Iranian and they were martyred during the war" the Iranian lawmaker said, pointing to the 1980-88 Iran-Iraq war.

The Jewish lawmaker objected to Israel's ongoing crackdown on Palestinians and stressed that the "Zionist school of thought does not represent Judaism in any way, just as al-Qaeda does not represent Islam."
Posted by Tony at 5:08 AM