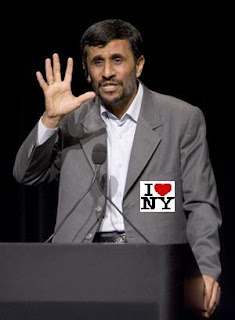 "....Somewhere in Tehran, Mrs Clinton’s remarks will have prompted Mr Ahmadinejad to smile his pantomime villain’s smile. He’s going to New York because he believes he’ll have an opportunity to confound US objectives.

Sure, he’ll be the focus of much opprobrium – senators from Mrs Clinton’s own party tried to reverse her administration’s decision to grant him a visa, apparently ignorant of their country’s obligations as host to the United Nations. And there will be hundreds of demonstrators across from the UN headquarters, perhaps some waving Israeli flags. At least, Mr Ahmadinejad hopes so, because he too intends to make an issue of Israel – not by threatening to wipe it out, but by pointing that Israel possesses a nuclear arsenal capable of wiping out Iran 20 times over, and yet doesn’t feature in Washington’s non-proliferation agenda.

So while the US hopes to use Iran’s failure to fully comply with the transparency requirements of the treaty to raise support for new sanctions against Tehran, the Iranians plan to draw attention to western double standards in applying the NPT....."
Posted by Tony at 6:32 AM