The fall guy in Iraq 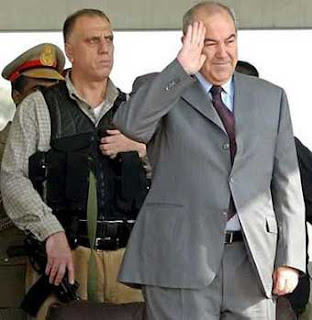 Even as the "surge" proceeds in Baghdad, the US is quietly moving to implement "Plan B", which would be nothing less than a coup d'etat pushing the hapless Nuri al-Maliki aside and installing former CIA asset and neo-con favorite Iyad Allawi back in as a dictator. Nothing less than a return to strongman rule will restore order, Washington believes.

"The Bush administration has perfected the art of fall-guy selection. The more convoluted the plot, the more credible the fall guy must be. As Lewis "Scooter" Libby was the fall guy in Washington, Premier Nuri al-Maliki will be the fall guy in Baghdad.

The Baghdad conference on Saturday was a derivative talk-fest setting up three committees to prepare the way for another meeting at the foreign-minister level next month in Istanbul. The subtext, though never explicit, is more glaring: it is the absolute US impotence to guarantee security or stability in Iraq, and the desperate search for a way out, now pitting the "axis of fear" (Saudi Arabia, Egypt, Jordan, Kuwait and the United Arab Emirates) against the "axis of evil" (Iran and Syria).....

Thanks to wily, Mao Zedong-inspired, nimble muqawama tactics, the much-dreaded Battle of Baghdad is not happening - at least not yet. The muqawama has dissolved into the general population. For the moment, Arab guile is tactically defeating US firepower - as even American generals admit.

General David Petraeus, touted as the miracle worker who might save the occupation from itself, had to admit on the record that in fact the surge won't solve or stabilize anything. To "stabilize" Baghdad to a minimum, the US would have to deploy at least 120,000 combat troops.

But that's not the point. The point is that this gory chronicle of a failure foretold is inevitably slouching toward the "secret" US Plan B - which is none other than installing the new Saddam Hussein: in this case the same old "Saddam without a mustache" (as he is known in Baghdad) Iyad Allawi. Allawi's stellar record - former car-bomber, Ba'ath thug, alleged embezzler (in Yemen), Central Intelligence Agency (CIA) asset, corrupt interim prime minister and "butcher of Fallujah" - could have been penned by a Hollywood hack.

Maliki has been the fall guy from the start. Unlike Libby in Washington, he was not following Dick Cheney's command. He may have even suggested the broad terms of the surge to Bush. But the Bush administration had no trouble trapping him in his own insecurities in one more operetta starring loads of "collateral damage".

In essence, Maliki and his helpless, corrupt government - whose only role is to enforce imperial US edicts in Iraq - will be blamed by the Bush administration for failing to help the Pentagon occupy and "pacify" the country with minimum hassle. He doesn't even control the Green Zone: the US does. Baghdad's neighborhoods are controlled either by the muqawama or by Shi'ite militias. The ministries of Defense and Interior are infested with death squads. Basra is being slowly ethnic-cleansed: Sunnis were 40% in 2003; now they are less than 14%......

Maliki, the fall guy, is already irrelevant. Any analysis of US imperial designs since the CIA-engineered coup against prime minister Mohammed Mossadegh in Iran more than half a century ago reveals the same pattern. If you want divide-and-rule and total domination, who's your man? A clever, charismatic nationalist or a ruthless CIA asset? "
Posted by Tony at 8:21 AM