The Silence of the Lambs? Proof of US orchestration of Death Squads Killings in Iraq 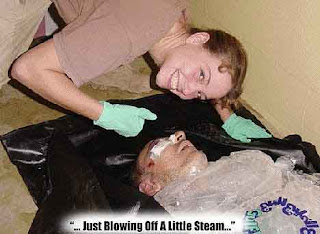 A Cry to Raise Our Voices!

A Good Article
by Max Fuller

"......The implications of these two testimonies as well as the absence of independent and public scrutiny are obvious. The Occupation has done nothing at all to halt abuse at the Interior Ministry’s network of secret prisons or curtail in any way the culture of impunity in which they exist. And lets be absolutely clear what we are talking about here. This is as close as we can get to the tide of sectarian violence sweeping Iraq, whose victims are almost invariably arrested by Interior Ministry personnel, who are then horribly tortured within Interior Ministry prisons and whose bodies finally surface in abandoned lots, are dredged from rivers, are buried in shallow graves in the desert or left as human detritus around sewage works (Former human rights chief in Iraq John Pace stated that the majority of killings were being carried out by groups under the control of the Interior Ministry, Independent, 26 February 2006, while the Iraqi Organisation for Follow-up and Monitoring in Iraq found that in 92% of some 3498 cases of extrajudicial killing, the victims had been arrested by Interior Ministry forces). Such would undoubtedly have been the final fate of Professor Samarree and Mr Abid’s hapless fellow detainees.

Of course the Americans have always been aware of the existence of this and other horrific dungeons within Interior Ministry facilities. How could they not be? They set them up and continue to operate from the same facilities! And for any who would question the validity or Mr Abid’s testimony that American forces were regular visitors, his story is confirmed by Solomon Moore writing in the Los Angeles Times (9 July 2006), who stated that the US military had been at the facility before the November raid! And the same happened in Basra. After it was revealed by the Plaid Cymru MP Adam Price that British trained policemen had tortured prisoners to death with drills, we discovered, through the New York Times (!!), that American intelligence officers had been working alongside them at the Jamiyat police station, where they passed on names of suspects knowing that those suspects would end up as the victims of death squads. That is their modus operandi and it is duplicated by British military intelligence units, like the Joint Support Group, who brought their nefarious experience from Northern Ireland (where, as Chris Floyd has recently documented, they orchestrated sectarian murder through the Ulster Defence Association) straight to Iraq. Thus in Basra we find a paramilitary death squad outfit called the Revenge of God (Thar Allah) nurtured and protected by the British, linked to police intelligence and given control of nightly curfews, despite its boasts of killing members of the former state (see Ghosts of Jadiriyah for a more complete account)!.....

The distinguished dissident academic Edward Herman, recently wrote a paper entitled Iraq: the Genocide Option in which he argued that the US war in Iraq threatened to become genocidal. He was quite right to point to genocide. With credible figures of over one million Iraqi casualties, another three to four million displaced internally and externally, the total collapse of civic infrastructure and the imminent threat of political disintegration, there must already be a very real question as to whether Iraq continues to exist as a viable nation. To fully substantiate the charge, the only question technically remains establishing intent, although I believe that too is perfectly possible when we consider the statements on partition made by the likes of Leslie Gelb (New York Times 25 November 2003, 1 May 2006).......

In Iraq (with its much smaller population) the US has already matched in scale the violence perpetrated on Vietnam and the war goes on, although there is little indication that it has given up its economic interests. Undoubtedly a very great part of this violence is conducted directly by US forces (the extremely credible Lancet study suggests from 30-40%), but, despite surges, that proportion appears to be falling. That leaves perhaps as many as 500,000 violent deaths unattributed to Coalition military action. Herman states that some of these would belong to the Salvador Option, while the bulk of the others would fall into the pattern that he explicitly describes as large-scale communal civil war manipulated by the US. I think it is vital that we all remember that this inter-communal sectarian warfare still consists of anonymous bombs that target the Shia and which most Iraqis for good reason believe are the work of the occupation and sectarian killings of Sunnis by members of the security forces – along with academics, engineers, lawyers, trade unionists, imams, doctors, teachers and other state functionaries by paramilitary forces operating from the Ministry of the Interior . This is indeed the application of the Salvador Option and it contributes an essential part of the ongoing genocide in Iraq."
Posted by Tony at 5:39 AM