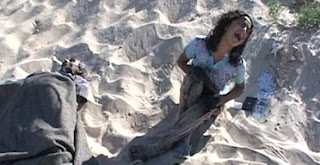 She was the 12-year-old girl filmed crying alongside her father and siblings as they lay dying - victims of an explosion at a family picnic. But what happened to Huda Ghalia next? Rory McCarthy meets the shy, teased girl who became a symbol of Palestinian despair

"......Then he took a call from a contact in the ambulance service: the Israeli military were shelling the beach at Beit Lahiya and there were casualties. He called his driver and they jumped into the car.

That afternoon at the beach, Abu Harbeed shot about 10 minutes of film for which he later won two awards. He arrived just in time to record the aftermath of a terrible explosion that had killed most of the Ghalia family. Seven were dead: Ali Ghalia, 49, and one of his wives, Ra'eesa, 35, together with five children: Haitham, five months old; Hanadi, 18 months; Sabreen, four; Ilham, 15; and Aliya, 17. Several others were injured, some severely, including more children from the family.

Much of the film Abu Harbeed made that day is so graphic it would never be broadcast on television in the west. One clip, however, was broadcast repeatedly that day and in the days that followed. It showed Huda Ghalia, aged 12, distraught and sobbing by the body of her dead father. It was an image distilling Palestinian despair, one that recalled the film of Mohammad al-Dura, the 12-year-old boy who died in his father's arms in Gaza in a hail of gunfire six years ago, at the start of the intifada.......

They don't have time to notice that several of the bodies they are carrying are dead, the wounds horrific, impossible to survive. One of the men reaches for a girl, grabs her black clothes at the shoulder and places her on a green canvas stretcher. Her left arm has been blown off just above the elbow. She is pale, unconscious and looks dead, but in fact she survives. I learned later that her name is Amani. Somewhere among the bodies is her sister, Ayhaam. She, too, is badly injured but survives.....

In the months after the explosion on the beach, I went to visit Huda and her family many times, to listen to the story of a household struck by a tragedy, a family that captured the headlines and then dropped from sight. I ate with them, went to school with them, drove with them to see relatives and visited their injured in hospital.....

After a while, Huda appeared. She was barefoot and dressed in a black cloak with a white veil on her head. A gold bracelet hung from her wrist. She was quiet and monosyllabic: still visibly affected by what had happened. Huda and her two younger sisters have started at a new school, a Hamas-run girls' school in Gaza City, their tuition another gift from Hamas. She said she preferred the new school. "I have new friends now," she said. "I don't see the old friends any more." She had just returned from a visit that she, her two sisters, her mother and her aunt made to the United Arab Emirates. "It was fine," she said. It was her first time out of Gaza....."
Posted by Tony at 6:51 PM